The cultivation of vines requires various stages of care, which must be organised and scheduled according to the annual development cycle of the plant, with the aim of obtaining optimal ripening of the grapes to produce good wines. If you are in our position, experiencing the first years of planting, you will be anxious to start these practices, knowing, however, that you must comply with the schedule that nature imposes on you.

So you hope that in order to start pruning, the month of January will be cold but without frost and possibly snow. In Salento, it rarely snows; therefore, when this does happen, there are many resulting inconveniences. The temperatures of this January have settled between 4 °C/13 °C. In all our vineyards, only 7 days of rain were recorded. In truth, in the lower Salento, the winter is not very rainy, it is more so in autumn. It was decided to prune the spurred cordon in the Specchia district in Parabita, unlike last year. In Alezio, in the Mitriano district, trained pruning was carried out as the plant was younger. Thus giving the roots the incentive to go down deep to develop a strong and healthy root system.

Pruning lasted until February, the month with the same climatic conditions as January. A month that in the Specchia district, 200 metres above sea level, saw us busy laying out the spurred cordon after choosing it. Under the careful supervision of our Winemaker Andrea Fattizzo and thanks to Paolo’s skilful hands.

A February that brought us a severe flu, but primarily this virus that in Italy has encountered a very old population. Multiple factors have caused several deaths on the peninsula. In the countryside, we worked with safety distance, gloves, masks and a lot of care. We are still experiencing the anguish of the virus, but spring did not take long to come.

So March lived up to expectations and turned out to be unstable. Summer days in an initial phase, autumn in a second phase. The vine is reacting with its colourless “weeping” to the effects of the spring sun which, heating the soil, pushes the sleeping sap towards the ends of the stump; the pruning cuts begin to ooze this sap until it heals completely. These days we are witnessing the budding phase, which marks the beginning of a new annual cycle and hopefully the end of a black period caused by the Coronavirus.

We are at the end of March and Paolo and Giuseppe are proceeding with the first tillage: ploughing and milling, moving the clods of earth that have been compacted since autumn. This causes the soil and the roots to heat up. In this way, the soil is well ventilated, which promotes root growth, and the entire soil is reactivated. In addition, our farmers uproot the weeds that have grown between the rows with their hands.

We will continue to work the land throughout the cycle with the aim of developing the deepest roots, which, sunk into the soil, will allow better nutrition in the case of summer drought. But above all, optimal absorption of the nutrients characteristic of the composition of the soil that hosts them, resulting in the regions’ characteristic features being fully expressed. 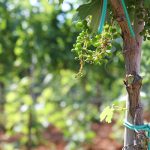